Most pest birds are content to perch on your roof waiting for food, making a noise and, more often than not, a mess – not the jackdaw, they prefer to make themselves at home in your chimney.

If the thought of sharing a part of your home with a family of jackdaws, albeit out of view, is not enough to concern you then the mess that they can create definitely will. 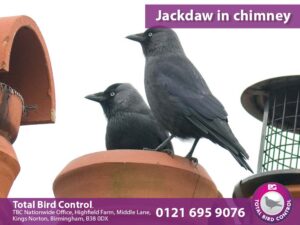 Persistent and resourceful, jackdaws will prey on the weaknesses in your chimney to force their way in and begin to set up a cosy home.

Protected from the elements in the snug surroundings of a chimney, jackdaws generally make their move indoors when the fire being lit is not usually a problem.

The nesting season for Jackdaws runs from April to July, so if you have a chimney listen out for signs of activity from the spring onwards.

Are jackdaws in your chimney a problem?

In short, yes, they can be a serious problem but not always in the way that other nuisance birds are. The big problem with jackdaws is the amount of debris they stuff down your chimney while crafting a nest.

Should you have heard the tell-tale signs of a bird rustling and calling in the chimney you might also expect to see twigs drop down to the fireplace.

But these will be just the tip of the iceberg as when jackdaws build a nest they bring in vast amounts of twigs. This mass of twigs – and often discarded bits of rubbish the birds have collected – will work to completely block your chimney and pose a serious fire risk.

Lighting a fire with birds in the chimney would be against the law that protects wild birds when nesting, it would also be a terrible idea as you are more like to see smoke pour back into the house or a chimney fire take hold.

What can I do about jackdaws in my chimney?

If you believe you have jackdaws nesting in your chimney the best option is to wait until the end of the nesting season – or until you know that the fledgling birds have left – then seek the help of a certified chimney sweep.

Sweeping the chimney after it has played host to jackdaws is essential to clearing the hazard that has been left behind and allowing you to safely light your fire once more.

A certified chimney sweep will be aware of the problems that jackdaws bring and will make sure any nests are removed within the law.

How can I prevent jackdaws nesting in my chimney?

Looking forward, make sure you put in place adequate protection to stop jackdaws from being able to access the chimney again in future.

Guards can be fitted to the top of chimneys to prevent birds from nesting in them, but it is vital that this work is carried out by a professional to ensure fumes can still escape.

Further bird deterrents can be put in place around the property, such as netting and spikes to make the building inhospitable to pest birds.

If you have a problem with pest birds on your property, Total Bird Control will be able to advise you on the best course of action and install bird control measures to prevent future problems.

Total Bird Control were selected to supply and fit some netting to our rear service yard. It was such a complex job we were worried if it could be done, however when it was completed it was amazing … END_OF_DOCUMENT_TOKEN_TO_BE_REPLACED

‘May I mention to you as a company that you pass on my thanks to Mike Nash and colleague for his professional and efficient netting of our roof yesterday. I have also expressed my satisfaction to my M… END_OF_DOCUMENT_TOKEN_TO_BE_REPLACED

We just wanted to say, firstly, how pleased we were with the work done and, secondly, how impressed both our housesitters and our neighbours were with Michael Nash, the young man who did the work. Bot… END_OF_DOCUMENT_TOKEN_TO_BE_REPLACED

‘Thanks to Ashley and his team for a swift and efficient job in our garden. Great results achieved and everything left tidy all cuttings removed in addition to taking away some old fencing we had. … END_OF_DOCUMENT_TOKEN_TO_BE_REPLACED