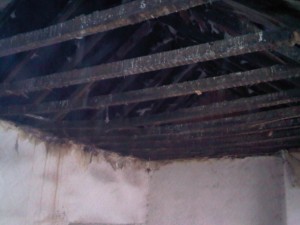 This property had been vacant for many years and at some point a small window at the front of the building had become broken. This provided an access point into the building for pigeons.

The building had also previously sustained a leak in the roof, which resulted in the ceiling becoming damaged and provided pigeons with a place to roost.

Over time other parts of the ceiling had also become damaged, which resulted in the property becoming littered with pigeon droppings and nesting materials.

Due to problems with the pigeons, a decision was made to remove the ceilings and debris in one go.

A full disinfectant spray was carried out prior to the work taking place, thus ensuring a safe working environment for our trained staff to carry out the required work.

The ceiling was then removed and all exposed droppings, nesting materials and waste was removed and disposed of via sealed skips for Health & Safety reasons.

Total Bird Control were selected to supply and fit some netting to our rear service yard. It was such a complex job we were worried if it could be done, however when it was completed it was amazing an… END_OF_DOCUMENT_TOKEN_TO_BE_REPLACED

‘May I mention to you as a company that you pass on my thanks to Mike Nash and colleague for his professional and efficient netting of our roof yesterday. I have also expressed my satisfaction to my M… END_OF_DOCUMENT_TOKEN_TO_BE_REPLACED

We just wanted to say, firstly, how pleased we were with the work done and, secondly, how impressed both our housesitters and our neighbours were with Michael Nash, the young man who did the work. Bot… END_OF_DOCUMENT_TOKEN_TO_BE_REPLACED

‘Thanks to Ashley and his team for a swift and efficient job in our garden. Great results achieved and everything left tidy all cuttings removed in addition to taking away some old fencing we had. … END_OF_DOCUMENT_TOKEN_TO_BE_REPLACED