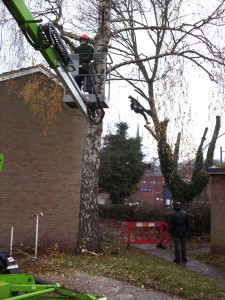 Our Gardenbusters division has recently carried out large scale treeworks to remove dead and dying trees/tree limbs within a residential area of Bromsgrove, in order to make safe and protect the health and safety of residents, general public and nearby properties.

The work, which was completed over a one week period, was organised such that all felling/pruning was carried out on a Saturday, in order to minimise any health and safety risks to the general public.  All working areas were cordoned off for safety of the public, and ‘look-out’ ground staff were also put in place, to help prevent any unauthorised access to the working area.

A variety of trees were worked on, including a Scots Pine that was hanging over a public car park, which a ‘two man team’ brought down in sections.  A large dangerous limb was removed from a Beech tree and a Silver Birch was also pruned.  We were also requested to pollard a Lime tree which had been previously badly pruned. The debris from these trees was then removed over the following five days.

Total Bird Control were selected to supply and fit some netting to our rear service yard. It was such a complex job we were worried if it could be done, however when it was completed it was amazing … END_OF_DOCUMENT_TOKEN_TO_BE_REPLACED

We just wanted to say, firstly, how pleased we were with the work done and, secondly, how impressed both our housesitters and our neighbours were with Michael Nash, the young man who did the work. Bot… END_OF_DOCUMENT_TOKEN_TO_BE_REPLACED

‘May I mention to you as a company that you pass on my thanks to Mike Nash and colleague for his professional and efficient netting of our roof yesterday. I have also expressed my satisfaction to my M… END_OF_DOCUMENT_TOKEN_TO_BE_REPLACED

‘Thanks to Ashley and his team for a swift and efficient job in our garden. Great results achieved and everything left tidy all cuttings removed in addition to taking away some old fencing we had. … END_OF_DOCUMENT_TOKEN_TO_BE_REPLACED