Before we start talking about the different types of pigeons in the UK, it’s worth mentioning that there is no official division between doves and pigeons. Both are well-loved wildlife or pest problem, depending on which side you’re on, they each have tiny, slim bills, round heads, curvy bodies with soft and very dense feathers, thin and short legs, tapered wings, and crooning/cooing calls.

Interestingly, the wild rock dove, which is commonly found in the wilderness, was once a domesticated dove just like town pigeons and the feral pigeon. So how many types of pigeons are there in the UK? Let’s take a quick look at some of the most popular types of pigeons in the UK.

What Types of Pigeons UK are There?

Often compared to rock doves and feral pigeons due to their size and plumage, stock doves are easily recognizable. They have mostly blue and grey bodies and a unique bottle green band located on the back of their necks. When they are flying people can notice the black edges located on their wings. They can be found all over the UK except in some areas of Ireland and northern Scotland. 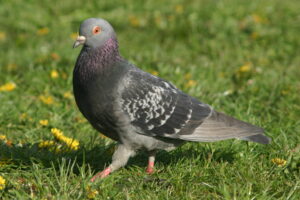 As previously mentioned, they were once domesticated birds for food. Rock doves have a wide range of shades, but darker colours usually dominate their feathers. They are known as persistent pests in buildings in urban areas once their number grows.

Collared doves have pale pink and brown colours and a unique black collar on their neck. They also have slightly red feet and distinctive red eyes. They usually live alone, but it is not unusual to see them gathered in larger numbers.

The turtle dove has a unique size. It is smaller and also a little bit darker compared to the collared dove, but it is a little bit larger compared to blackbirds. The black and chestnut colour and pattern found on the wings make them easily recognisable. In recent times, the number of turtle doves has dropped.

The woodpigeon is the most commonly found pigeons in the UK – it’s also the UK’s largest pigeon. The woodpigeon can be identified through its majority grey colouring with white neck patches and white patches on the wings which can be seen clearly during flight. Domesticated or feral, their blue neck and loud wing flap during their flying through urban locations make them easily identifiable.

Woodpigeons are often feral pigeons and considered pests – noted as vermin requiring pest control in public places and buildings where they can gain access. They’re often much happier when left to be a feral pigeon and part of our countryside wildlife, with the cooing call of the woodland pigeon being a familiar sound in our woodland areas. Sadly, these pigeons have become more apparent in areas and buildings in our inner cities and towns where they live off scraps and crumbs and can bring with them a mess and often disease.

It is specifically bred to provide us with food for consumption. These Pigeons of this species are among the largest species of birds, but they are very unsuited to life in the wild. A king pigeon’s size and excessive breeding cause genetic problems which make it difficult to fly. The king pigeon is one of the most popular pets because it is docile, easy-to-care-for, and comes in a variety of colours. Most of them are blue or white and are not varied in colour.

Pigeons of this type are named for their long, often grey-banded tail. Their distinctive white band on the back of the neck distinguishes them from feral pigeons of a similar size. The majority of them inhabit forests and woodlands (much like woodpeckers) and very few live in urban environments (unlike feral pigeons). Berry, nuts, and small insects are core components of their diet, foraged from the woodlands.

The rock dove, or feral pigeon, is almost a British institution. The feral pigeon is a wild ancestor of the world’s domestic pigeons. Feral pigeons come in a variety of colours, commonly black, grey, blue, purple, and white with different coloured patches on their wings. Feral pigeons that have less white on their feathers look remarkably like a wild rock dove.

Although part of nature, when feral pigeons descend on urban towns and inner cities they are considered a nuisance. You will often find city council-planned deterrents for feral pigeons, such as large spikes on rooves of buildings or in train stations where the pigeons would build a nest and live quite happily if left alone.

The problem is, feral pigeons group and can bring with them potentially hazardous diseases.

What’s the difference between pigeons and wood pigeons, aren’t they all feral pigeon?

If you live in the city of Manchester, Liverpool, York, Birmingham, of the Capital City, London, or any highly-populated area in England you are likely to have come across a group of feral pigeons during your normal day. These birds aren’t daft, feral pigeons will group where they get fed – and feral pigeons will even recognise a person who regularly feeds them! In a public place, especially one with a range of food vendors or shops, there are going to be pigeons.

Feral pigeons nest in cities around England. Places like abandoned or derelict buildings are commonly prime locations for feral pigeons who will nest and breed in a large wild group. Feral pigeons can be highly unsanitary and spread potentially highly harmful diseases if left to reside in inner-city buildings.

How many pigeons are there in the UK?

England is home to an estimated 18 million feral pigeons. A mating pair of feral pigeons can breed up to six times within a year. This is why bird control is needed for this species of pigeon particularly! If you need support identifying pigeon types the UK, this article is the perfect guide to the different pigeon varieties the UK.

How many different species of pigeons are there?

Pigeons and feral pigeons can be found worldwide with the exception of the most remote islands and coldest regions. There are around 250 species of pigeons known. This article is the perfect guide to all types of pigeons UK.

How do I identify a pigeon?

Pigeons can be identified by their coo sound, similar to that of a dove. Pigeons and doves have three different coos – one coo is called the perch coo, also known as an advertising song, to showcase themselves and make a pigeon or dove of the opposite gender aware of their presence. Another coo is called a nest coo and this will come from a bird’s nest site. Their final coo is called the bow coo and this is commonly in response to a bird mate.

The coo sounds from pigeons and doves are similar to each other, although bird experts can spot their differences. However, they are unlike the song of other birds, so if you hear a coo, you are close to a pigeon or a dove. If you’re in an urban area or city, it’ll most probably be a pigeon.

If you are experiencing any problems with pigeons at your home or business property and need professional advice, please contact us now.

‘Thanks to Ashley and his team for a swift and efficient job in our garden. Great results achieved and everything left tidy all cuttings removed in addition to taking away some old fencing we had. … END_OF_DOCUMENT_TOKEN_TO_BE_REPLACED

We just wanted to say, firstly, how pleased we were with the work done and, secondly, how impressed both our housesitters and our neighbours were with Michael Nash, the young man who did the work. Bot… END_OF_DOCUMENT_TOKEN_TO_BE_REPLACED

‘May I mention to you as a company that you pass on my thanks to Mike Nash and colleague for his professional and efficient netting of our roof yesterday. I have also expressed my satisfaction to my M… END_OF_DOCUMENT_TOKEN_TO_BE_REPLACED