There are a number of contradictions when it comes to starlings – not least how a species that creates shows of great beauty is also considered a pest bird.

Starlings are famous for their Murmurations, which create a fantastic show in the sky as thousands of the birds swoop and dive together in a beautiful display of nature. 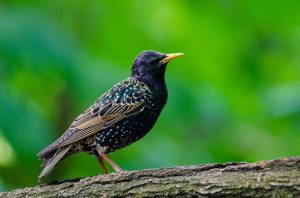 Though it is also their movement in large numbers that means starlings are considered as a pest bird species.

Starlings can choose to roost in industrial buildings – and if this is the case, a large flock will certainly make its presence known. With flocks being known to reach 100,000 there is good reason to be concerned about starlings setting up home at your property.

The other major contradiction regarding starlings is that for a bird seen in such large numbers, the species is facing an uncertain future after a huge drop in numbers was recorded in the last 40 years.

Due to a decline in population of up to 70 per cent, Starlings are now on the red list of threatened species despite there still being nearly two million of the birds in the UK.

These numbers swell further during the winter when starlings head to the UK to escape colder temperatures in Scandinavia.

Why are Starlings a pest?

With such large numbers of starlings roosting together, bird faeces can become a serious problem if the birds make their home in an industrial or domestic setting causing a real health hazard.

There is also the potential for the birds introducing insects into buildings where they are nesting.

An invasion of starlings can also cause real problems for farmers by damaging crops on agricultural land as well as present a danger when found near to airports.

How can starlings be controlled?

Putting in place deterrents is the best way to avoid, or resolve, a problem with starlings.

Netting can help to protect buildings while noise is another deterrent, such as a recording of a bird of prey or the distress call of a starling.

Using deterrents will protect your property without causing harm to the birds.

Should you experience a problem with starlings or any other pest birds on your property the best solution is to seek the help of bird control professionals.

Get in touch with Total Bird Control today for more information.

‘Thanks to Ashley and his team for a swift and efficient job in our garden. Great results achieved and everything left tidy all cuttings removed in addition to taking away some old fencing we had. … END_OF_DOCUMENT_TOKEN_TO_BE_REPLACED

We just wanted to say, firstly, how pleased we were with the work done and, secondly, how impressed both our housesitters and our neighbours were with Michael Nash, the young man who did the work. Bot… END_OF_DOCUMENT_TOKEN_TO_BE_REPLACED

Total Bird Control were selected to supply and fit some netting to our rear service yard. It was such a complex job we were worried if it could be done, however when it was completed it was amazing … END_OF_DOCUMENT_TOKEN_TO_BE_REPLACED

‘May I mention to you as a company that you pass on my thanks to Mike Nash and colleague for his professional and efficient netting of our roof yesterday. I have also expressed my satisfaction to my M… END_OF_DOCUMENT_TOKEN_TO_BE_REPLACED