Pigeons are a type of bird that lives almost everywhere in the world. They are commonly found in urban areas. There are many people who enjoy their presence and even feed these interesting birds. However, there is another side associated with pigeons that no one likes. Many people use the term “flying rats” because their activity and the problems they cause. In case you are wondering what the 5 most common problems are caused by pigeons we have created a short list. 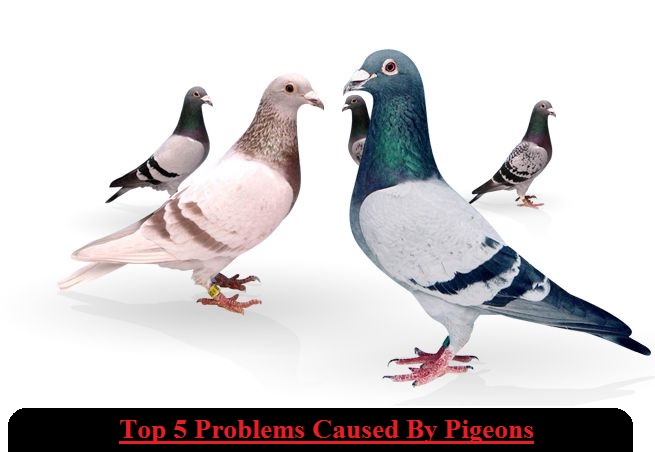 Pigeons can act as carriers of bacteria and fungi dangerous to humans. These harmful substances can be passed to human in few different ways. For instance, inhalation of faecal dust can lead to certain types of flu and fever. Pigeons can also contaminate water and food. Finally, they spread parasites like fleas, ticks and mites. Cryptococcus, histoplasmosis and salmonella are some of the diseases associated with pigeons.

Although pigeons are relatively peaceful and friendly toward humans, it is not unusual for them to attack people during the breeding period/season. They are very protective and they will attack anyone that they view as a threat for their young.

Just like any other type of pest bird, pigeons that are left to live in areas in large numbers will eventually damage the building and the surrounding area. Their faeces and their activity can pollute streets, cars etc.

Pigeons are well known for creating health and safety hazards. They produce faeces all the time and create mess wherever they are nestled. This can make the environment not only unsightly, but create a dangerous slip hazard.

If they are present close to airports, they can disrupt the proper landing and taking off of aircraft.

If you’re experiencing a pigeon control problem and need advice, please get in touch.

‘Thanks to Ashley and his team for a swift and efficient job in our garden. Great results achieved and everything left tidy all cuttings removed in addition to taking away some old fencing we had. … END_OF_DOCUMENT_TOKEN_TO_BE_REPLACED

We just wanted to say, firstly, how pleased we were with the work done and, secondly, how impressed both our housesitters and our neighbours were with Michael Nash, the young man who did the work. Bot… END_OF_DOCUMENT_TOKEN_TO_BE_REPLACED

Total Bird Control were selected to supply and fit some netting to our rear service yard. It was such a complex job we were worried if it could be done, however when it was completed it was amazing an… END_OF_DOCUMENT_TOKEN_TO_BE_REPLACED

‘May I mention to you as a company that you pass on my thanks to Mike Nash and colleague for his professional and efficient netting of our roof yesterday. I have also expressed my satisfaction to my M… END_OF_DOCUMENT_TOKEN_TO_BE_REPLACED