Over the past 10 years the problem with seagulls appears to have increased as these large birds get ever more confident.

In particular the last few years have seen an escalation of the problem with the need for bird control to take action becoming increasingly evident.

Has the seagull problem got worse? 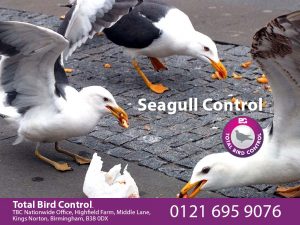 The number of seagulls defined as ‘herring gulls’ are actually in decline, so much so that the species is red listed in terms of being endangered. This may seem at odds if you live in an area that has seen an increased problem with seagulls.

However while the traditional coastal population of seagulls has plummeted the number of urban gulls has risen sharply leading to greater concerns about their impact in towns and cities. Often the reason for the growth in urban gulls is attributed to the availability of waste food for these opportunistic scavengers, along with plentiful warm, sheltered areas to roost in.

Seagull Problems – Why are seagulls a pest bird?

There is no denying it if you have ever been unfortunate enough to cross the path of a hungry seagull while enjoying a portion of chips – these large gulls will swoop in and steal food in an aggressive manner without a second thought. Large and apparently fearless, it is also possible to be injured if you get in the way of a seagull’s claws or beak.

As with all pest birds, seagulls also present a risk of passing in disease with concerns raised that they could even transmit ‘superbugs’ that are resistant to medication.

Again, as with other birds, the mess that roosting seagulls leave behind can be a serious problem. Bird droppings make areas slippery, messy and unsanitary.

At your home seagulls can be perceived as a threat and can deter people from even wanting to go outside. This threat has been highlighted by some reports of small pets being targeted. 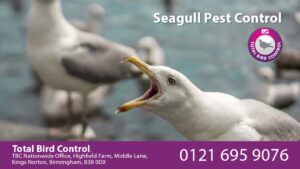 At a food business they can, quite frankly, be a nightmare. Cafes do not want to see customers running the gauntlet of swooping gulls trying to steal their food, while pubs and restaurants with outdoor areas face a real battle to keep gulls away from diners enjoying their meal.

Seagull Pest Control – How do you control seagulls?

All birds are protected, including seagulls, which mean that measures to control pest birds need to work as a deterrent.

The idea is to stop birds returning to an area or property by making it uninhabitable. This is achieved through the use of seagull spikes and seagull netting. Seagull netting will protect an area by putting it out of reach of the gulls while seagull spikes can be put onto building ledges, roofs and into corners to stop the birds landing there.

As it is illegal to kill or harm a seagull it is important to always call in the help of a professional bird control company, who will deal with the problem safely and within the law.

If you are experiencing a problem with seagulls at your property contact Total Bird Control to find out how we can help.

‘Thanks to Ashley and his team for a swift and efficient job in our garden. Great results achieved and everything left tidy all cuttings removed in addition to taking away some old fencing we had. … END_OF_DOCUMENT_TOKEN_TO_BE_REPLACED

We just wanted to say, firstly, how pleased we were with the work done and, secondly, how impressed both our housesitters and our neighbours were with Michael Nash, the young man who did the work. Bot… END_OF_DOCUMENT_TOKEN_TO_BE_REPLACED

‘May I mention to you as a company that you pass on my thanks to Mike Nash and colleague for his professional and efficient netting of our roof yesterday. I have also expressed my satisfaction to my M… END_OF_DOCUMENT_TOKEN_TO_BE_REPLACED

Total Bird Control were selected to supply and fit some netting to our rear service yard. It was such a complex job we were worried if it could be done, however when it was completed it was amazing an… END_OF_DOCUMENT_TOKEN_TO_BE_REPLACED