One positive about staying safe indoors during the Covid-19 lockdown is the chance to take time for the little things, such as watching the return of migrant birds in summer.

In fact, finding the joy in the little things will quite often make all the difference to the way you feel and watching the returning birds is something that most people can enjoy doing at no extra cost.

It will also be another way to help keep children entertained – and can help to boost their understanding of the natural world.

From the start of April many favourite species of birds make their way back to the UK to enjoy the summer months here.

Which birds migrate from England over winter? 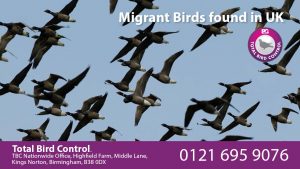 The RSPB estimates that as many as 40 per cent of the world’s birds migrate.

In the United Kingdom we see birds that migrate here for a milder winter, as well as birds that breed here in spring then migrate south in autumn.

These southern migrants returning for the spring will be the ones to look out for over the coming weeks while you remain at home.

And, if you are really lucky, you could even spot a bird on a stopover as it breaks up a longer journey north or south, such as an Artic tern.

People living near to the coast can also look out for birds that live out at sea as they return for spring.

Most birds that head north to spend the spring and summer in the UK do so to enjoy more space to nest in, and with fewer predators.

Food offers another enticement with the temperate, but often wet, summers offing up a feast of insects for migrant birds to enjoy. 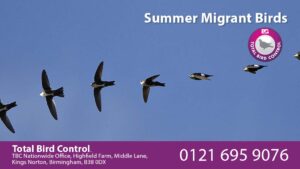 Many of the more easily identifiable birds will make a return to the UK from the start of April, with birds continuing to arrive into May. These include:

Watching wild birds return to your garden is a soothing and enjoyable pastime. Should you however, experience problems with aggressive ‘pest’ birds, such as pigeons and seagulls, you may need the support of a specialist bird control company.

Total Bird Control were selected to supply and fit some netting to our rear service yard. It was such a complex job we were worried if it could be done, however when it was completed it was amazing an… END_OF_DOCUMENT_TOKEN_TO_BE_REPLACED

We just wanted to say, firstly, how pleased we were with the work done and, secondly, how impressed both our housesitters and our neighbours were with Michael Nash, the young man who did the work. Bot… END_OF_DOCUMENT_TOKEN_TO_BE_REPLACED

‘May I mention to you as a company that you pass on my thanks to Mike Nash and colleague for his professional and efficient netting of our roof yesterday. I have also expressed my satisfaction to my M… END_OF_DOCUMENT_TOKEN_TO_BE_REPLACED

‘Thanks to Ashley and his team for a swift and efficient job in our garden. Great results achieved and everything left tidy all cuttings removed in addition to taking away some old fencing we had. … END_OF_DOCUMENT_TOKEN_TO_BE_REPLACED